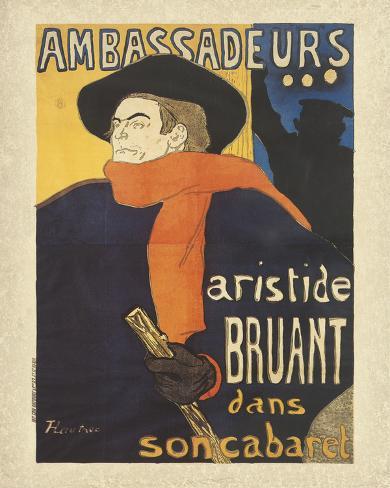 Henri Marie Raymond de Toulouse-Lautrec-Monfa was born to aristocratic parents at the Hôtel du Bosc in Albi, Tarn, in the Midi-Pyrénées region of France on November 24, 1864.

Despite being known as a prolific French artist, the painter and illustrator of the cafes, cabarets, and dance halls, including the Moulin Rouge, his physical characteristics are one of his most mentioned features. Two separate accidents as a teenager, each one breaking a femur in one or the other of his legs, did not heal correctly and gave him a stunted appearance as an adult – with a grown man’s torso/upper body, and a child’s deformed legs. It was because of his accidents that he became a draftsman and an artist, and also, because of his deformities and feelings of always being on the outside, he was attracted to the bohemian lifestyle of MontMarte in Paris, rather than keeping with his aristocratic roots.

Lautrec moved to Paris in 1882 where he studied under the portrait painter Léon Bonnat and in the studio of Fernand Cormon. This put him in the center of Montemarte, a bohemian neighborhood filled with artists, writers, philosophers, and creatives that he rarely left for the next 20-years. It was here that he befriended Van Gogh and Émile Bernard.

Lautrec spent his nights in the cabarets and famously in the Moulin Rouge after it opened in 1889 and made his paintings and drawings of the dancers and the clientele. The Moulin Rouge hung his work and saved him a table – he was a respected guest. He was often in the company of prostitutes, using them as models and painting them in their everyday lives.

In addition to his growing alcoholism, Toulouse-Lautrec also frequented prostitutes. He was fascinated by their lifestyle and the lifestyle of the “urban underclass” and incorporated those characters into his paintings. Fellow painter Édouard Vuillard later said that while Toulouse-Lautrec did engage in sex with prostitutes, “the real reasons for his behavior were moral ones … Lautrec was too proud to submit to his lot, as a physical freak, an aristocrat cut off from his kind by his grotesque appearance. He found an affinity between his condition and the moral penury of the prostitute. — Wikipedia

A model is always a stuffed doll, but these women are alive. I wouldn’t venture to pay them the hundred sous to sit for me, and god knows whether they would be worth it. They stretch out on the sofas like animals, make no demand and they are not in the least bit conceited.” — Toulouse-Lautrec

Through all of this his alcoholism was embracing him. It was affecting his already diminished health.

In February of 1899 his family had him committed to Folie Saint-James, a sanatorium in Neuilly-sur-Seine for three months. Lautrec’s constant intoxication finally led to his early end, and he died on September 9, 1901 at the age of 36 from alcoholism and syphilis.

Below is one of my favorite Lautrecs, Le Lit. I think it’s still in the Musée d’Orsay: 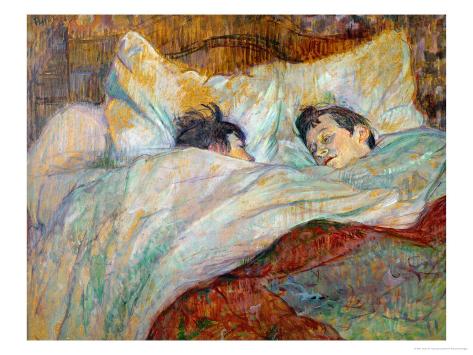 Health Condition:
Toulouse-Lautrec suffered with health conditions for all of his life. It is speculated that family inbreeding (his grandmothers were sisters and his parents were first cousins) may have exacerbated his health issues. He fractured both of his legs as a teenager and these never healed, leaving it to be widely believed that he suffered from a congenital bone disease which may have been pycnodysostosis (PYCD). The syndrome became known commonly as Toulouse-Lautrec Syndrome. While he developed an adult-sized torso, his legs never grew beyond those of a child.

You can read more about Henri de Toulouse-Lautrec on his Wikipedia page.

You can read about Lautrec and see more of his work through these titles on Amazon: