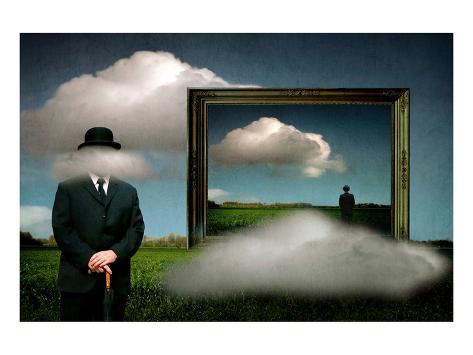 Born as René François Ghislain Magritte on November 21, 1898 in Lessines, in the province of Hainaut, Belgium.

As an artist, Magritte became know for his wit and his compositions that take ordinary objects – like apples, clouds, pipes, bowler hats – and put them in out of context environments, or naming objects what they are not, sometimes even stating the obvious. In any case, his work is thought provoking and often dream-like.

Magritte started painting in 1915 and made the usual rounds of art school studies and switching up his style – from Impressionism to Cubism and Futurism before becoming a Surrealist – until he found his own painterly voice. During 1916–1918, he studied at the Académie Royale des Beaux-Arts in Brussels and he also took classes at the Académie Royale from the painter and poster designer Gisbert Combaz.

His early career was as a graphic designer. His work underwent a transformation in 1926, when he began to reinvent himself as a figurative artist.

In September 1927, Magritte moved to Paris to be closer to the French Surrealist group. His three years there would be the most prolific of his life. Surrealism, a movement led by André Breton, sought to liberate the mind by subverting rational thought and giving free rein to the unconscious. … A signal development of Magritte’s time in Paris was his word-paintings, in which he sought to investigate the relationship between text and image, often breaking apart well-worn connections between the two. … Magritte reimagined painting as a critical tool that could challenge perception and engage the viewer’s mind. His was a method of severing objects from their names, revealing language to be an artifice—full of traps and uncertainties. — MoMA

René Magritte described his paintings as “visible images which conceal nothing; they evoke mystery and, indeed, when one sees one of my pictures, one asks oneself this simple question, ‘What does that mean?’. It does not mean anything, because mystery means nothing either, it is unknowable. — Wikipedia

Magritte died of pancreatic cancer on 15 August 1967, aged 68, and was interred in Schaerbeek Cemetery, Evere, Brussels. 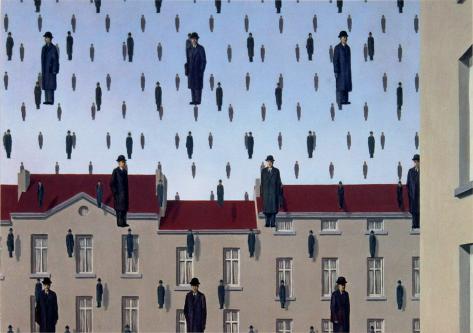 You can read more about Magritte on his Wikipedia page.

You can also read about Magritte and see more of his work from these titles on Amazon: