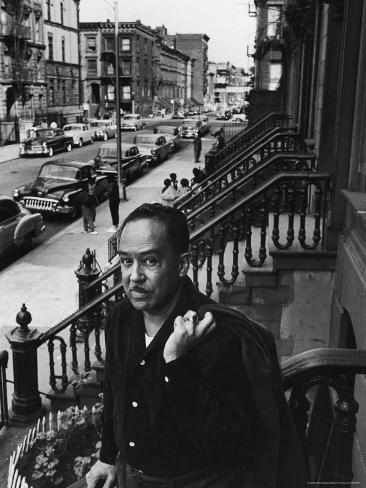 African American Poet/Writer Langston Hughes Standing on the Stoop in Front of His House in Harlem by Robert W. Kelley

Hughes was a prolific African American writer who was known for his “jazz poetry” and for bringing a renaissance to Harlem.

The background of the Hughes family was complex. While Hughes himself is considered to be African American, his ancestry is all over the map. He is descended from paternal grandmothers who were slaves and who both had children with white slave owners – one Scottish American and the other Jewish American. Hughes’s maternal grandmother was of African-American, French, English and Native American descent and her husband was of African-American, Euro-American and Native American ancestry.

His poetry and fiction portrayed the lives of the working-class blacks in America, lives he portrayed as full of struggle, joy, laughter, and music. Permeating his work is pride in the African-American identity and its diverse culture. “My seeking has been to explain and illuminate the Negro condition in America and obliquely that of all human kind”, Hughes is quoted as saying. He confronted racial stereotypes, protested social conditions, and expanded African America’s image of itself; a “people’s poet” who sought to reeducate both audience and artist by lifting the theory of the black aesthetic into reality. — Wikipedia

The artist who becomes thoroughly aware consequently ceases to be one. -- Henry Miller