Johnston was an early American photographer and photojournalist whose career lasted for more than sixty years. She is most known for her portraits, images of southern architecture, and various photographic series featuring African Americans and Native Americans at the end of the 19th and turn of the 20th centuries. She was a known bohemian and feminist.

Johnston was born, in 1864, without wealth but with good connections: her father, Anderson Johnston, was head bookkeeper in the Treasury Department, and her mother, Frances Antoinette Johnston, was a Washington correspondent for the Baltimore Sun. They supported their only child’s interest in art, sending her to Paris to study painting. Returning to Washington in 1885, Johnston, then 21, set out to support herself, first as a magazine illustrator and later as a freelance photographer. Her commissions ranged from taking pictures of coal miners underground to documenting educational institutions, such as the Hampton Normal and Agricultural Institute (now Hampton University), founded to educate former slaves. Her photographs of schools were displayed at the Universal Exposition in Paris in 1900 as evidence of America’s progress in education. Toward the end of her career she turned to photographing gardens and Southern architecture, preserving views of many antebellum buildings that have since been razed. — Smithsonian Magazine 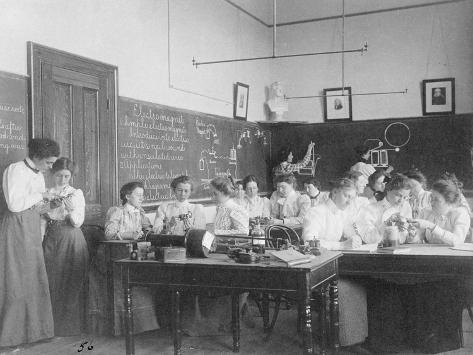 Johnston passed away on May 16, 1952, in the French Quarter of New Orleans, Louisiana.

A very dry video talking about her life and career:

Learn more about Frances Benjamin Johnston through these titles:

The aim of life is to live, and to live means to be aware, joyously, drunkenly, serenely, divinely aware. -- Henry Miller