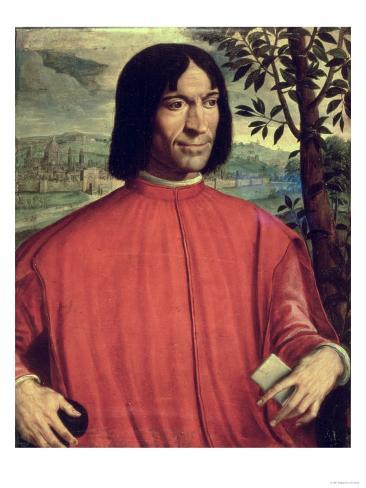 Today we celebrate the birth of Lorenzo de Medici, born on this day in 1449 in Florence, Italy.

Lorenzo became the de facto leader of the Florentine states after his father, Piero di Cosimo de’ Medici died in 1469. Sure, he was a political dude, but his nickname was Lorenzo The Magnificent. It wasn’t so much a nickname as it was a political title that was bestowed upon him at the age of twenty-one. But even so he became known as a magnificent patron of the arts, himself a poet, a friend to intellectuals and philosophers, as well as favored diplomat and banker/financier. Making a name for himself as a patron of the arts during the Renaissance means he was the patron of the likes of Michelangelo, Botticelli, and Leonardo da Vinci, among others. Michelangelo actually went to live with the Medici family when he was fifteen after Lorenzo discovered him at The Academy of San Marco, and stayed with the family for three years living alongside the children of Lorenzo and Giuliano. Two of those children would become Popes – Pope Leo X and Pope Clement VII – who would later commission him to work in Rome.

Lorenzo also spent much of his family’s fortune in support of the arts and letters. He paid large sums to Domenico Ghirlandaio, and Fra Filippo Lippi to beautify the city of Florence. At the request of Lorenzo, the humanist John Lascaris and the poet Angelo Poliziano traveled far and wide to gather manuscripts for the Medici libraries. Lorenzo allowed these manuscripts to be copied by scribes for other libraries, and as they spread through Europe, so did the Renaissance.

You can find out more about him by reading his bio on Wikipedia.

The practice of soulful travel is to discover the overlapping point between history and everyday life, the way to find the essence of every place, every day: in the markets, small chapels, out-of-the-way parks, craft shops. Curiosity about the extraordinary in the ordinary moves the heart of the traveler intent on seeing behind the veil of tourism. -- Phil Cousineau