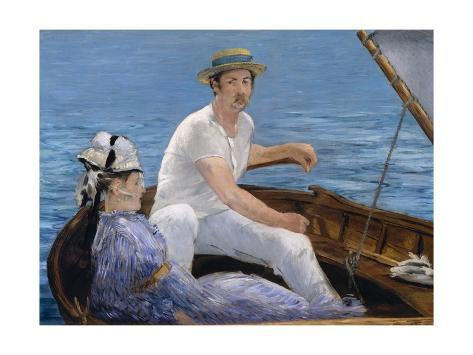 Manet embarked on the canvas after being challenged to give the Salon a nude painting to display. His uniquely frank depiction of a self-assured prostitute was accepted by the Paris Salon in 1865, where it created a scandal. … The painting was controversial partly because the nude is wearing some small items of clothing such as an orchid in her hair, a bracelet, a ribbon around her neck, and mule slippers, all of which accentuated her nakedness, sexuality, and comfortable courtesan lifestyle. The orchid, upswept hair, black cat, and bouquet of flowers were all recognized symbols of sexuality at the time. This modern Venus’ body is thin, counter to prevailing standards; the painting’s lack of idealism rankled viewers. The painting’s flatness, inspired by Japanese wood block art, serves to make the nude more human and less voluptuous. A fully dressed black servant is featured, exploiting the then-current theory that black people were hyper-sexed. That she is wearing the clothing of a servant to a courtesan here furthers the sexual tension of the piece.

Olympia’s body as well as her gaze is unabashedly confrontational. She defiantly looks out as her servant offers flowers from one of her male suitors. … — from Wikipedia 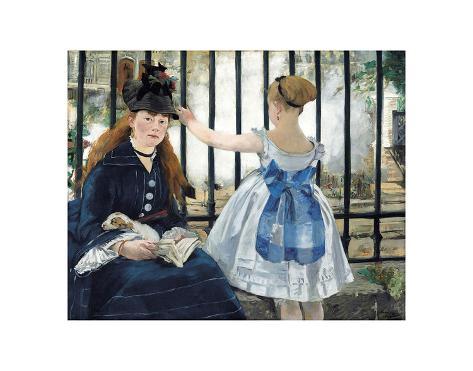 The Railway, widely known as The Gare Saint-Lazare, was painted in 1873. The setting is the urban landscape of Paris in the late 19th century. Using his favorite model in his last painting of her, a fellow painter, Victorine Meurent, also the model for Olympia and the Luncheon on the Grass, sits before an iron fence holding a sleeping puppy and an open book in her lap. Next to her is a little girl with her back to the painter, watching a train pass beneath them.

Instead of choosing the traditional natural view as background for an outdoor scene, Manet opts for the iron grating which “boldly stretches across the canvas”[16] The only evidence of the train is its white cloud of steam. In the distance, modern apartment buildings are seen. This arrangement compresses the foreground into a narrow focus. The traditional convention of deep space is ignored.

Historian Isabelle Dervaux has described the reception this painting received when it was first exhibited at the official Paris Salon of 1874: “Visitors and critics found its subject baffling, its composition incoherent, and its execution sketchy. Caricaturists ridiculed Manet’s picture, in which only a few recognized the symbol of modernity that it has become today”. The painting is currently in the National Gallery of Art in Washington, D.C.[18] — from Wikipedia

Learn more about Manet from these titles:

The pilgrim is a poetic traveler, one who believes that there is poetry on the road, at the heart of everything. -- Phil Cousineau