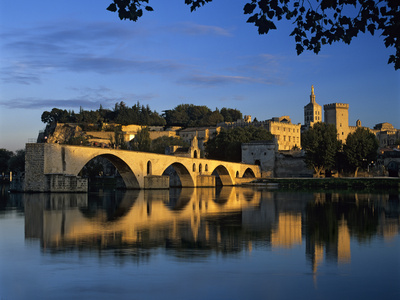 As I walked out onto the Pont Saint Bénézet I listened to the man who was talking to me on my telephone-like audio tour.

At one time, and for many years, this bridge was not only the only entrance into the walled city of Avignon, it was the only crossing point on the southern Rhône, he said.

Walking along I noticed that the surface of the bridge was made of pavé, uneven cobblestones that hurt my feet and turned my ankles even with the best of shoes. As I walked out over the River Rhône the invisible man that was talking into my ear was telling me about the years of pilgrimages here to Avignon, during the Avignon Papacy period from 1309 to 1378. Daily the pilgrims would come to this holy city – weekly, monthly, and yearly they would come. Walking in the summer they would be beaten down by the heat and in the winter they would be submitted to the treacherous conditions of ice and snow on the bridge. For those who were unlucky enough to fall over the side during those winter months – there were no guardrails – they were left in the river until the ice melted in the spring.

Today the bridge goes only a very short distance out into the river. It had been repaired and rebuilt several times before it was finally washed out permanently in the seventeenth century. It now has no function other than as an historical monument. I kept walking on the bridge until I came to its end and I watched as the calm green waters of the River Rhône drifted by. The man in my ear was saying that the river had once been dangerous and full of violent rapids. There was no evidence of this now, the river having long ago been tamed by the hand of man.

I had thought about going to Avignon all summer. Now that I was there I wondered why. The South of France is beautiful, but Avignon is just another city on a list of cities. I wasn’t sure why I had felt compelled to go there. I listened a little more to the man in my ear, telling me the history of the Popes, the Palais, the wall surrounding the old city and the drawbridge. He painted a verbal picture of medieval life and as I reached the end of the bridge, I imagined myself in a crowd of dedicated pilgrims.

And then I turned around…

I suddenly knew. Why I was there. To experience just this moment. What I saw from that vantage point was the medieval town of Avignon, stripped of any aspect of modernity, except maybe the cars driving on the Boulevard de la Ligne. But my eyes could easily avoid those. I stood there on the end of the bridge, a little breathless, just watching the inanimate buildings and the trees. It was if I had stepped outside of linear time and I was looking at this view as if I, and the city of Avignon, were in a timeless place.

This feeling only lasted a few moments. As I walked back towards the city, with each step I began to close the loop and the seconds began to pass in line again, one after the other.

… Nowadays, as one stands in the urinal beside the Palace, one is hardly aware of this other life. The Palace stands abrupt, cold tomblike, before a bleak open square. Facing it is a ridiculous-looking building called Institute of Music. There they stand, facing each other across an empty lot. Gone the Popes. Gone the music. Gone all the color and speech of a glorious epoch. Were it not for the little quarter behind the Institute who could imagine what was once life within the Palace walls? When this tomb was alive I believe that there was no separation between the Palace and the twisted lanes below; I believe that the dirty little hovels, with their rubbled roofs, ran right up to the door of the Palace. I believe that when a Pope stepped out of his gorgeous hive into the glitter of sunlight he communicated instantaneously with the life about him. Some traces of that life the frescoes still retain: the life of outdoors, of hunting, fishing, gaming, of falcons and dogs and women and flashing fish. A large, Catholic life, with intense blues and luminous greens, the life of sin and grace and repentance, a life of high yellows and golden browns, of winestained robes and salmon-colored streams. — Henry Miller, Black Spring: A Saturday Night, 1962

I wanted a little break from the streets of Paris so I took the train down to the South of France for a few days during my trip in 2000 to France. I based myself in a small budget hotel, the Hotel Colbert, near the train station in the city of Avignon and created wonderful breakfasts and lunches out of the artisan bakery around the corner on Cours Jean Jaurès.

The train trip on the TGV was only 3 1/2 hours from Gare de Lyon to Avignon. It would have taken 8 hours in a car.

Provence is not as big as one may think. Arles is a mere 18 minutes by train to the southwest of Avignon. Orange, twenty minutes to the north. Marseilles, an hour to the south. All are easy daytrips from Avignon.

The smaller villages such as Gordes, St. Remy and those in the Luberon, and the wildlife preserve of The Camargue are only accessible via car, which are easy to rent near the train station in Avignon, or by tourbus.

If you have a car, you can pay a visit to a few of the wineries along the way. Avignon is in the heart of the Côtes du Rhône wine region :)

Wandering re-establishes the original harmony which once existed between man and the universe. -- Anatole France