Little signs posted throughout the garden ask me to Keep on Path and remind me that paths are both literal and abstract concepts.

The many paths that wind through the small space that contains the Japanese Tea Garden in Golden Gate Park deceive me into thinking that the garden is much larger than it really is. Paths wind up and around and over and come back to crisscross at intersections to create an environment where, if it weren’t full of tourists, I could contemplate the meaning of the universe as I walk, or stand in front of the Buddha and meditate on his enlightenment. 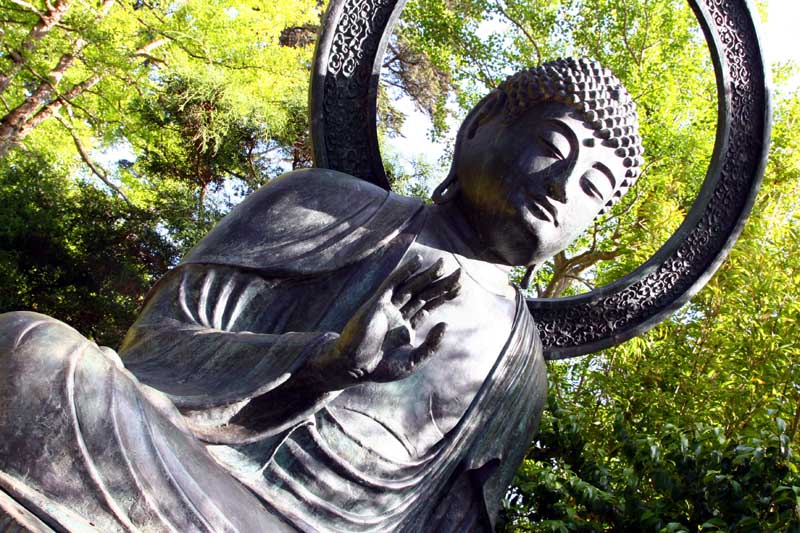 Walking by the Moon Bridge, the fine line between reality and illusion is dissipated. The half circle of the bridge combines with its reflection in the water below to form the illusion of a full-moon. Another name for it is the Taiko-Bashi, or drum bridge.

Steep steps leading up to the Buddhist Pagoda make me symbolically work slowly and steadily towards my goal of enlightenment.

Walking the paths through the garden, I find that I often return to a point I have already seen, only from a different direction. I then decide again from that point in which direction I should go, much like life when a crossroads is met over and over again.

Throughout the year the landscaping in this garden takes on the feeling of the seasons – from the blossoming of the cherry trees, to the red of the Japanese maples, the blooming of the wisteria and the autumn colors of the ginkoes. Walls of bamboo create discreet hiding places, giving the impression that I am in a private space. Rhododendrons. Azaleas. With rock and stone, the Zen Dry Garden creates the illusion of islands and flowing water, changing flow and direction with the whim of the person holding the rake.

Sitting in the old, small teahouse, the kimonoed waitresses carry pots of teas and cups, almond tea cookies, fortune cookies, and bowls of rice cracker snacks as they serve the visitors to the garden.

On a day when not many people are here, it is quite peaceful. 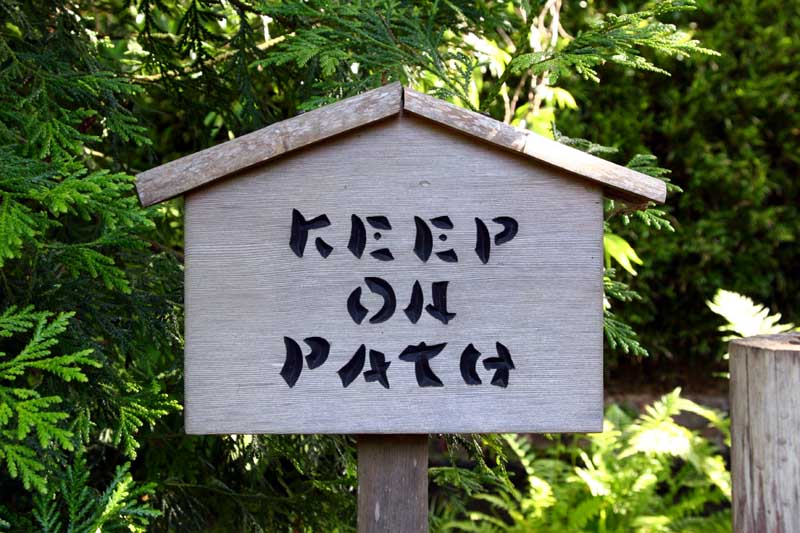 The Japanese Tea Garden in Golden Gate Park was created for the California Mid-Winter Exposition in 1894 by Baron Makoto Hagiwara and was the first Japanese Tea Garden in the United States. Initially it was known as the Japanese Village for the exposition. Mr. Hagiwara was a well to do landscarpe artist and imported the rare plants and exotic birds and koi for the garden from Japan.

In Japanese culture there are no accidents in a garden. The garden is considered to be an art form and has many elements with as many meanings. Also, because space in Japan is not an available commodity, a well designed Japanese garden will make the observer feel like the space they are in is much larger than it really is.

Hagiwara lived in and maintained the garden until his death in 1925, and then his family lived on the grounds of the garden until 1942 when the garden was confiscated by the government and the Hagiwara’s were removed to a Japanese internment camp during World War II.

Much of the garden was left to ruin during those war years. Some of the buildings, such as the one the family lived in, that Mr. Hagiwara had built by hand were destroyed, a number of the artifacts disappeared, and although many of the plants survived, many others also died off. You can still see the gates to the house, near the Zen Garden in the back of the garden. The tall red Buddhist Pagoda sits on the site where the Shinto Shrine once stood.

Another gift to San Francisco from Mr. Hagiwara was the fortune cookie. He was the first person in the United States to make them and they are still given out to the guests at the Tea House.

The Japanese Garden is now a mix of Japanese and Chinese garden elements. The highlights of the current garden, besides the maze of paths, are some of the rare Japanese plants, the koi in the ponds, and the bronze Buddha that was cast in 1790 and given as a gift in 1949 from the Gumps.

Hagiwara Makoto and his family were honored in 1974 with the placement of a large stone and bronze plaque, created by renowned local sculptor Ruth Asawa, in the garden. In 1985 a crew from Osaka, Japan, a sister city of San Francisco came and refurbished the garden.

All Year: Monday, Wednedsay, and Friday are free from 9am – 10am

Switzerland is a small, steep country, much more up and down than sideways, and is all stuck over with large brown hotels built on the cuckoo clock style of architecture. -- Ernest Hemingway